Early this morning (my time) I got a notification from the Pacific Tsunami Warning Center that there was no tsunami threat from an M 7.2 earthquake in the Vanuatu Islands.

Later, as I woke up I checked the USGS website to see that there was an M7.0 earthquake offshore of the Vanuatu Islands.

Based on the depth of the hypocenter (the 3-D location of the earthquake) it appears that this M 7.0 ruptured a thrust fault within the Australia plate. Given the uncertainty of the location of the megathrust fault, it is possible that this actually was on the megathrust subduction zone fault (so is what we call an “interface” event). I don’t think that the USGS finite fault model is correct (it seems unlikely that this earthquake ruptured a fault within the Australia plate and slipped up into the upper plate). But I could be wrong (which is quite common).

I don’t always have the time to write a proper Earthquake Report. However, I prepare interpretive posters for these events.
Because of this, I present Earthquake Report Lite. (but it is more than just water, like the adult beverage that claims otherwise). I will try to describe the figures included in the poster, but sometimes I will simply post the poster here. (UPDATE: I could not resist spending a little time looking at updated papers from this region, so have included some figures below.) 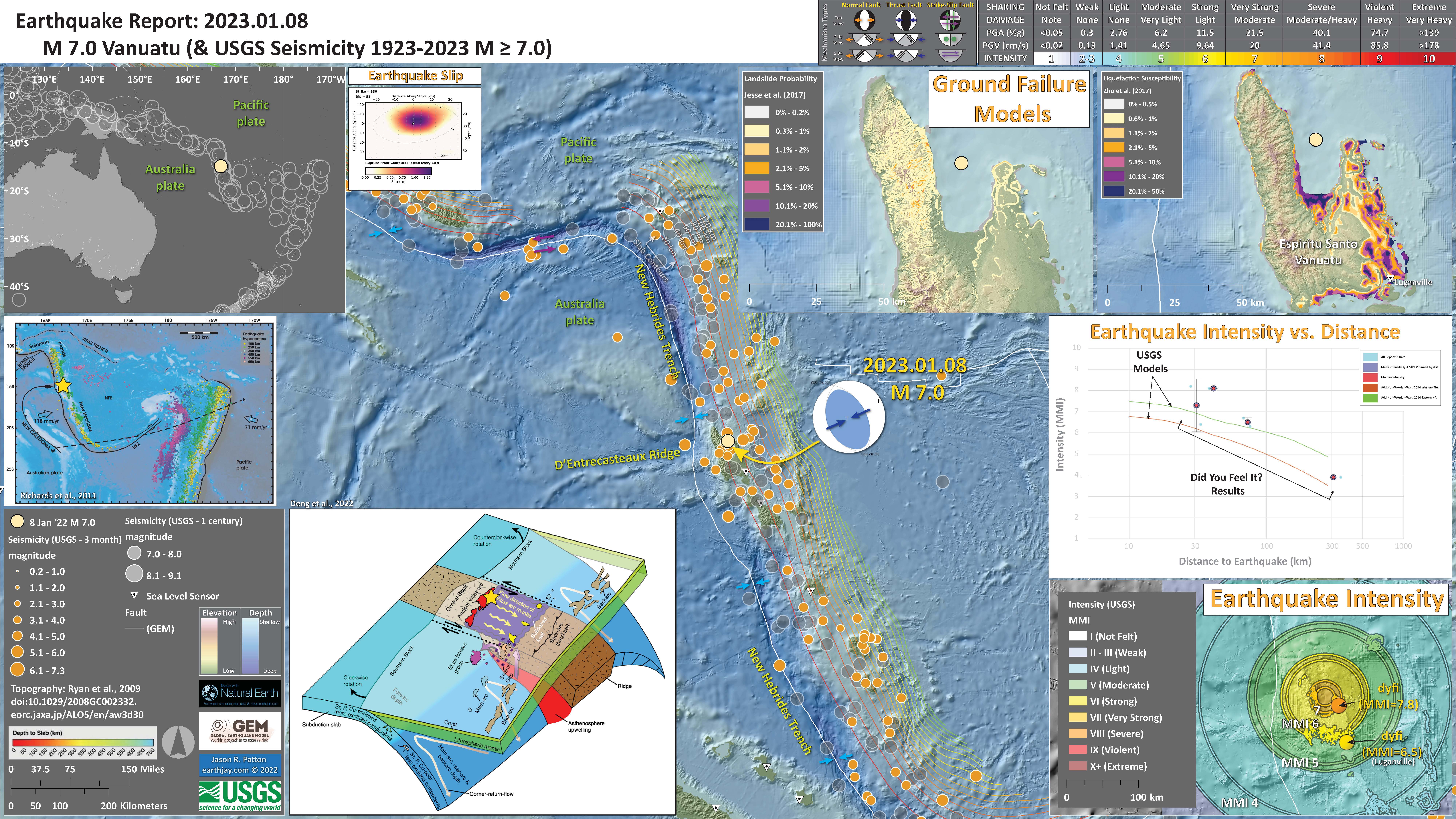 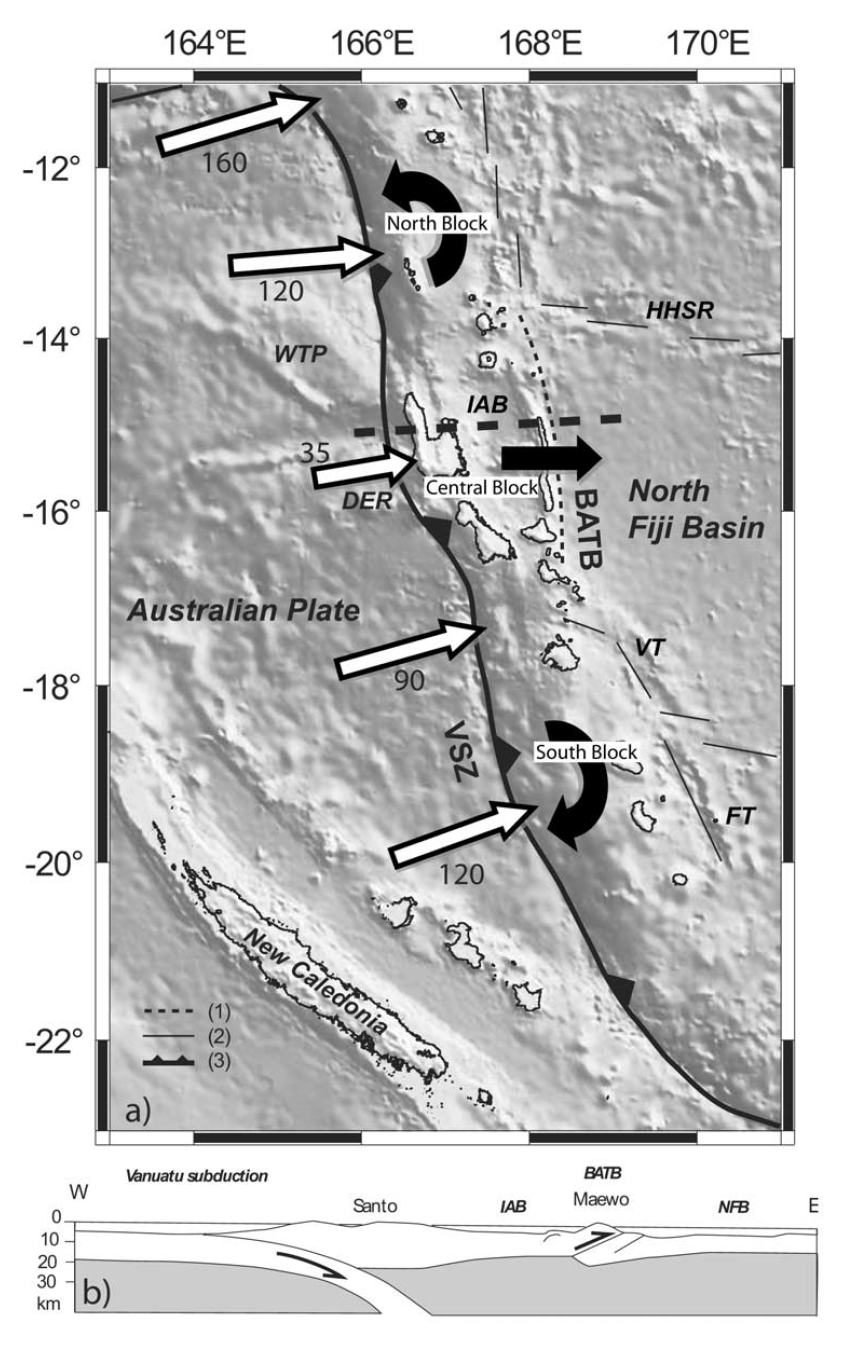 (a) Geodynamic setting of the VSZ, with block motions relative to the North Fiji Basin [from Calmant et al., 2003]. The Vanuatu arc is split into three blocks, with anticlockwise rotation (north), convergence (center), and clockwise rotation (south). Dashed line is the BATB; solid lines are the spreading ridge; bold line is the VSZ. Bathymetry data are from Calmant et al. [2002]. The black rectangle is the central part of the Vanuatu arc. White arrows are velocities (millimeters per year) with respect to the Australian plate (AP); black arrows are block motion with respect to the North Fiji Basin. Dotted line is the cross section of Figure 2b. (b) Schematic of the central part of the VSZ [from Lagabrielle et al., 2003]. The direction of this cross section is west to east, and it intersects the Santo and Maewo Islands (dotted line in Figure 2a). Abbreviations are as follows: IAB, Aoba Intra-arc Basin; BATB, back-arc thrust belt; NFB, North Fiji Basin. 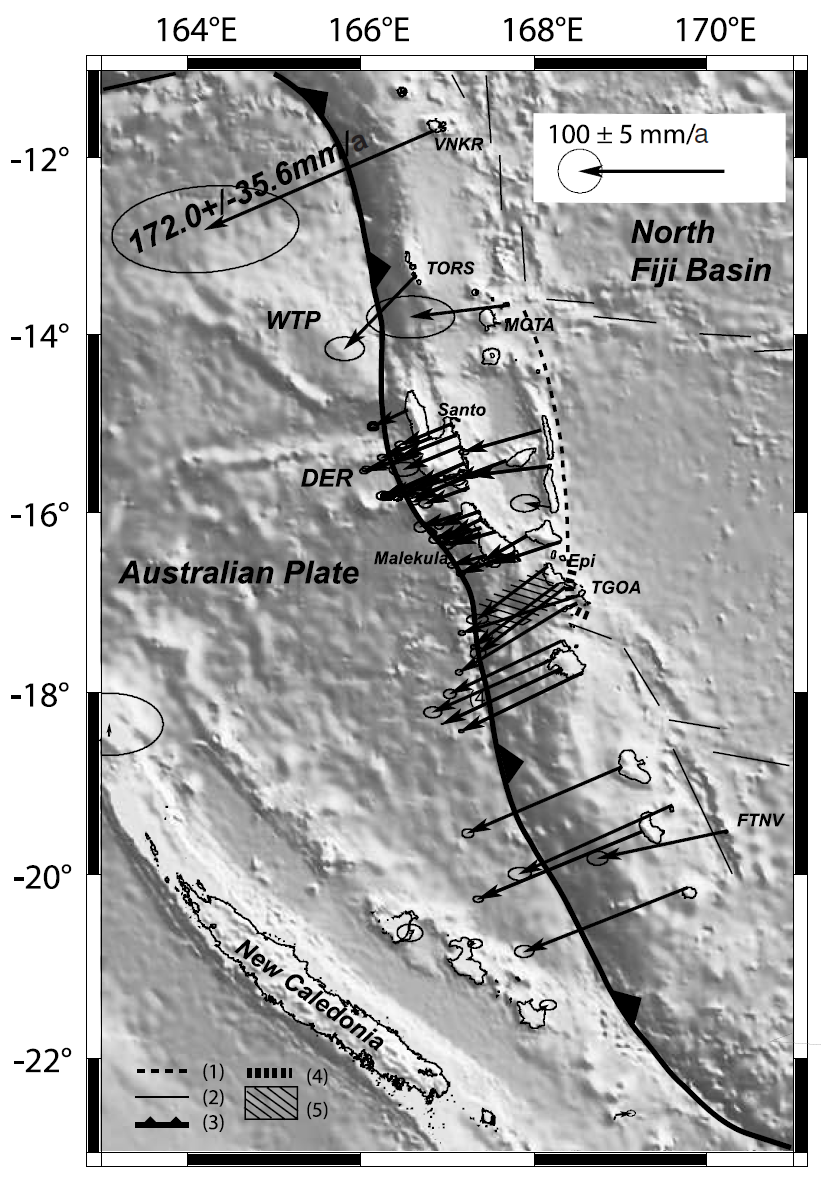 Horizontal interseismic GPS velocities for the VSZ in an Australia-fixed reference frame. The Australian motion is estimated as a rigid rotation from our GPS results with a least squares inversion. Abbreviations are as follows: WTP, West Torres Plateau; DER, D’Entrecasteaux Ridge. Lines are (1) BATB, (2) spreading ridge, (3) VSZ, (4) discontinuity supposed between TGOA and Epi island, and (5) transition zone. 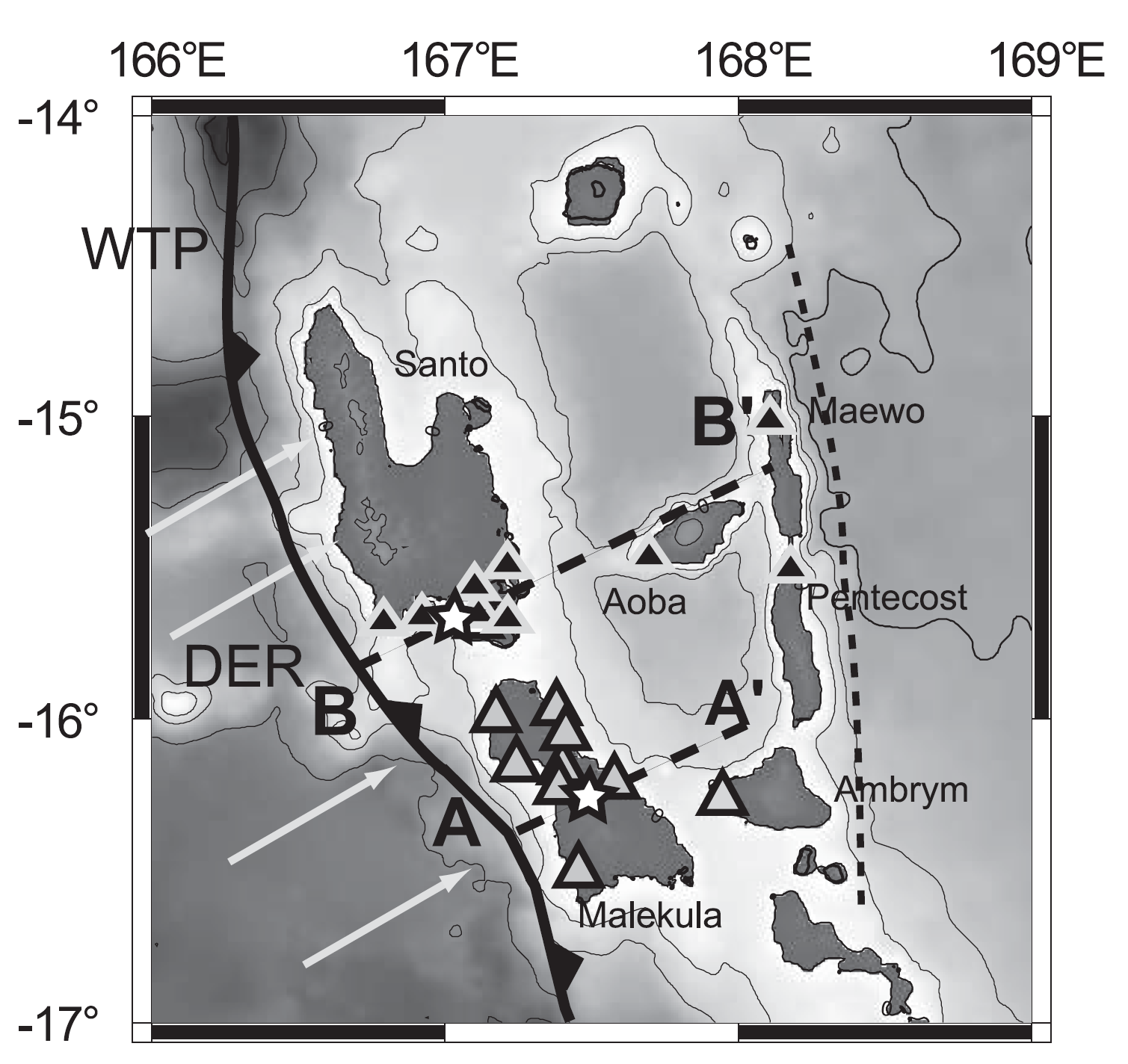 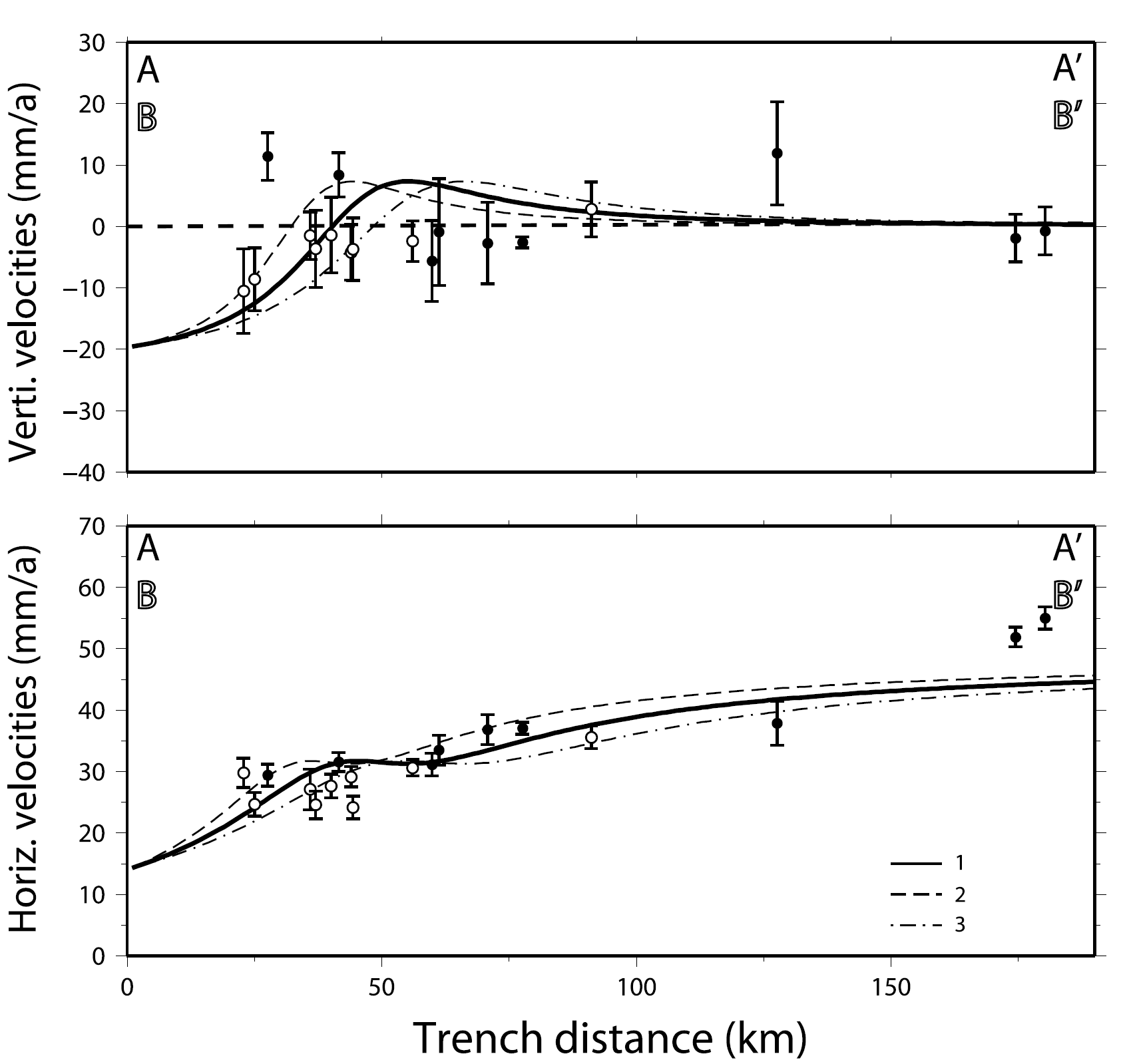 (top) Vertical and (bottom) horizontal (perpendicular to the trench) velocity profiles for the GPS stations of the A-A0 (open circle) and B-B0 (filled circle) transects. Distances are given with respect to the trench. The bold curves represent the best fit of the locked zone and long-term convergence rate model (dip, 20; width, 50 km; slip, 54 mm a1) estimated from observed velocities. Lines 2 and 3 represent the effect of the width variation in the model (45 and 60 km, respectively). See Figure 11 for the transect location. (right) Space-time plot of shallow (≤ 70 km) seismicity M ≥ 5.0 in northern Vanuatu recorded in the NEIC catalog as a function of distance south of ~10°N, 165.25°E. (left) The location of the seismicity on a map rotated to orient the trench vertically. Schematic diagram for the factors influencing the depth of the transition from horizontal extension to horizontal compression beneath the outer rise. Slab pull, the interaction of the descending slab with the 660 km discontinuity (or increasing drag from the surround mantle), and variations in the interface stress influence both the bending moment and the in-plane stress. Increases in the angle of slab dip increases the dominance of the bending moment relative to the in-plane stress, and hence moves the depth of transition towards the middle of the mechanical plate from either an shallower or a deeper position. A decrease in slab dip enhances the influence of the in-plane stress, and hence moves the transition further from the middle of the mechanical plate, either deeper for an extensional in-plane stress, or shallower for a compressional in-plane stress. Increased plate age of the incoming plate leads to increases in the magnitude of ridge push and intraplate thermal contraction, increasing the in-plane compressional stress in the plate prior to bending. Dynamic topography of the oceanic plate seawards of the trench can result in either in-plane extension or compression prior to the application of the bending stresses. Simplifi ed plate tectonic reconstruction showing the progressive geometric evolution of the Vanuatu and Tonga subduction systems in plan view and in cross section. Initiation of the Vanuatu subduction system begins by 10 Ma. Initial detachment of the basal part of the Australian slab begins at ca. 5–4 Ma and then sinking and collision between the detached segment and the Pacifi c slab occur by 3–4 Ma. Initial opening of the Lau backarc also occurred at this time. Between 3 Ma and the present, both slabs have been sinking progressively to their current position. VT—Vitiaz trench; dER—d’Entrecasteaux Ridge. 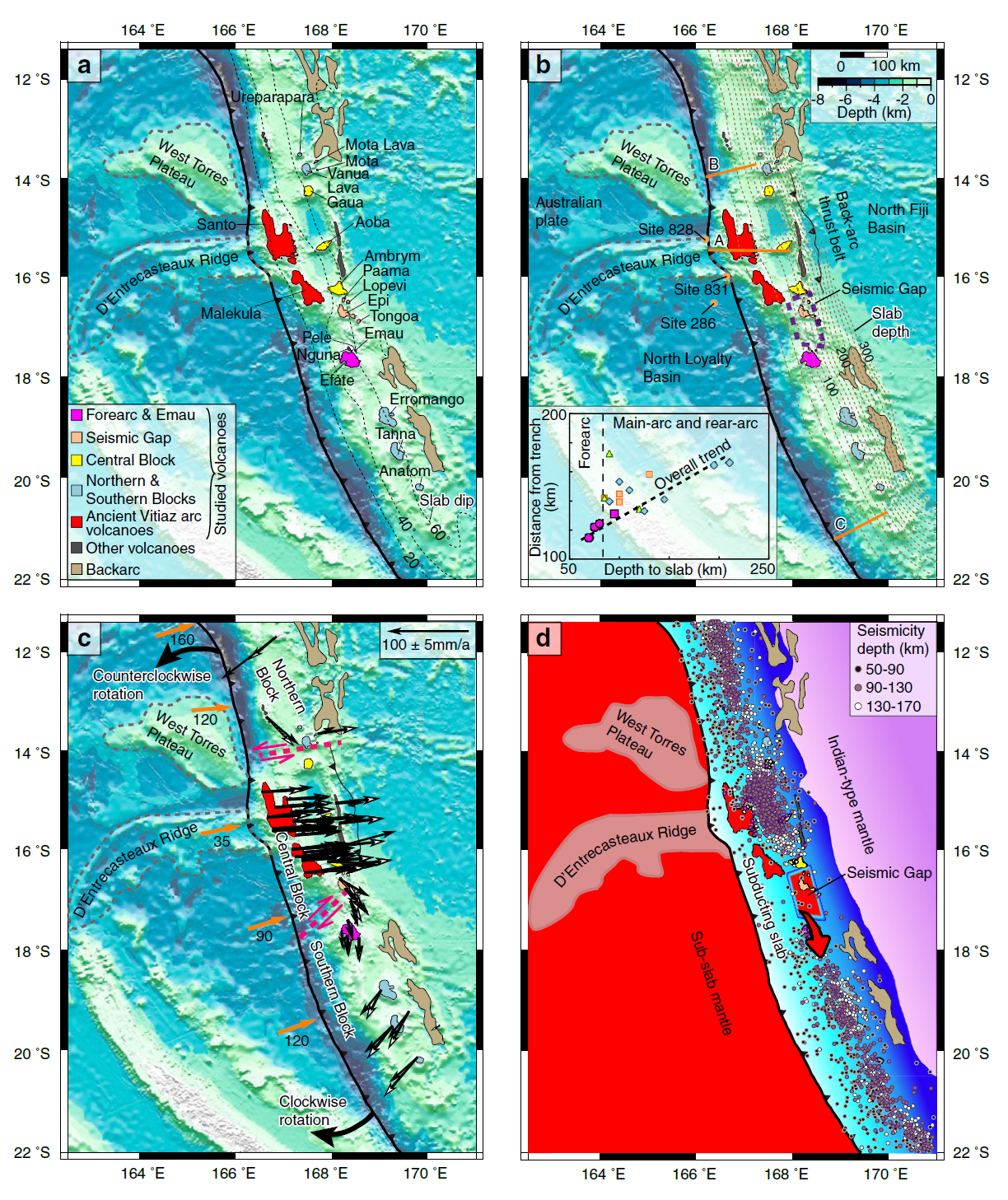 Geological and geophysical constraints regarding the evolution of the Vanuatu arc. (a) Bathymetric map showing the locations of islands for which samples were included in our geochemical compilation. Slab dip contours below the Vanuatu arc are displayed every 20° (from Hayes et al., 2018). (b) Bathymetric map of the Vanuatu arc and an inset showing depth-to-slab versus distance-from-trench for each of the sample localities included in our compilation (Table S1 in Supporting Information S1). Slab depth contours beneath the Vanuatu arc are displayed every 20 km (from Hayes et al., 2018). The orange lines show the chosen cross sections (i.e., Sections A, B, C) across the different blocks of the Vanuatu arc, which were used to estimate slab dips. Orange dots denote the location of Deep Sea Drilling Project Site 286 and Ocean Drilling Program Legs 134 Sites 828 and 831. (c) Interpreted geodynamic setting of the Vanuatu arc based on modern global positioning system velocity measurements (observed, black arrows; modeled, white arrows; from Bergeot et al., 2009). The Vanuatu arc can be divided into three tectonic blocks that are separated by two strike-slip faults (magenta dashed lines; Calmant et al., 2003; Taylor et al., 1995), which are the counterclockwise rotated Northern Block, the eastward migrated Central Block and the clockwise rotated Southern Block. Orange arrows indicate plate convergence velocities (in mm/year) with respect to the Australian plate (Bergeot et al., 2009). (d) Intermediate-depth seismicity distribution (50–170 km) since 1972 with magnitudes in the range of 4–7, from USGS Earthquake Catalog (https://earthquake.usgs.gov/earthquakes/search/). The seismic gap is highlighted by a solid polygon. The wide red arrow depicts the influx of hot sub-slab mantle to the forearc mantle wedge through a slab tear.

Schematic of the Vanuatu subduction zone to illustrate the model proposed by this study. The conceptual model highlights the role that the subducting buoyant D’Entrecasteaux ridge plays in the dynamic evolution of the Vanuatu arc. The introduction of D’Entrecasteauz Ridge causes shallow subduction and the development of a slab tear south of the ridge and the segmentation of the Vanuatu arc into the Northern Block, Central Block and Southern Block. Shallow slab subduction beneath the Central Block results in (a) squeezing out of the asthenospheric mantle; (b) scraping off the bottom of the ancient continental lithospheric mantle beneath the forearc, which then migrates ahead of the advancing slab and forms a bulldozed keel underneath the main-arc and (c) transmitting compressional stresses in the over-riding plate, which inhibits the formation of backarc spreading and instead produces a backarc thrust belt. Additionally, the ingression of hot subslab mantle causes partial melting of the cold forearc mantle and produces magmatism anomalously close to the trench (i.e., the Efate, Nguna, and Pele volcanoes that are situated in the forearc). 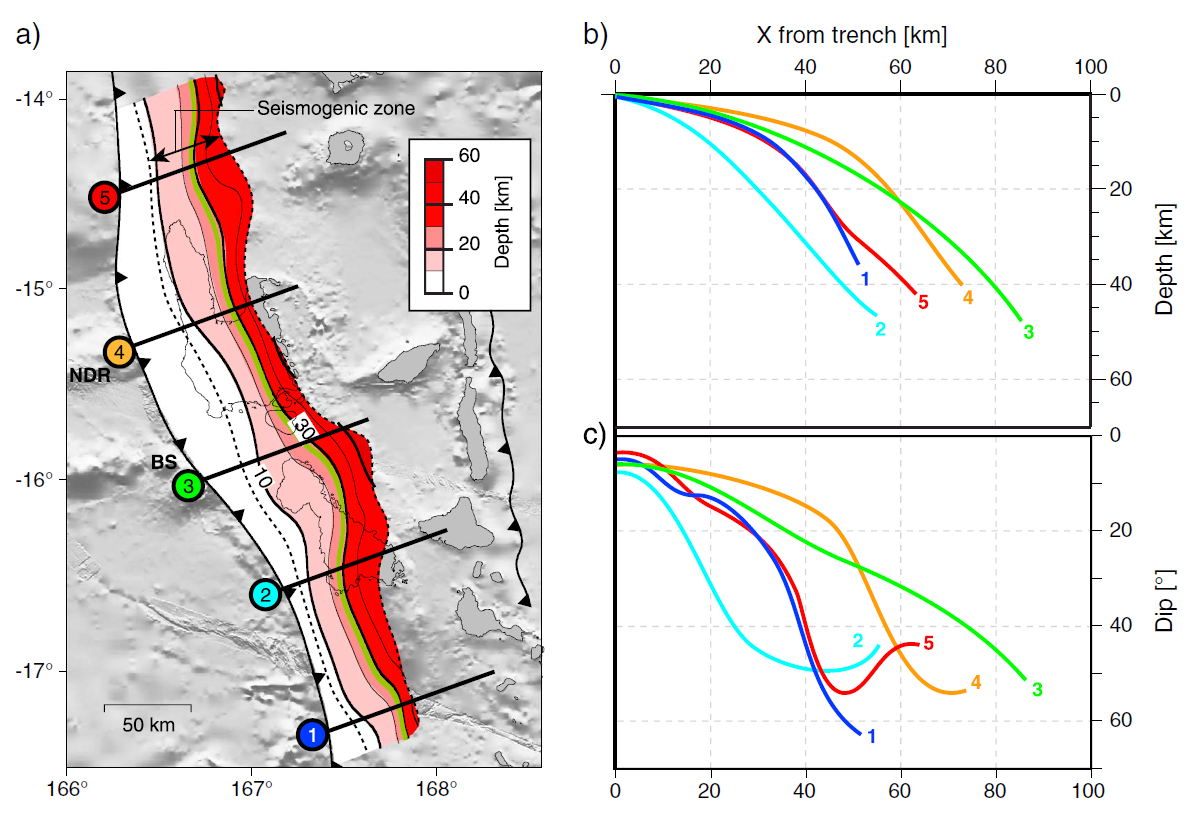 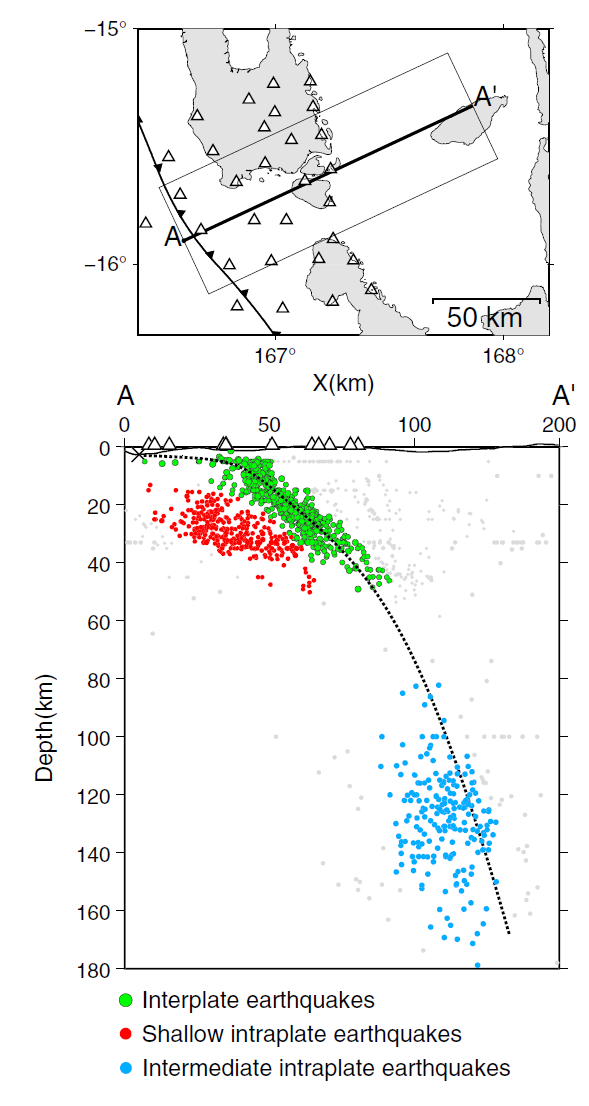 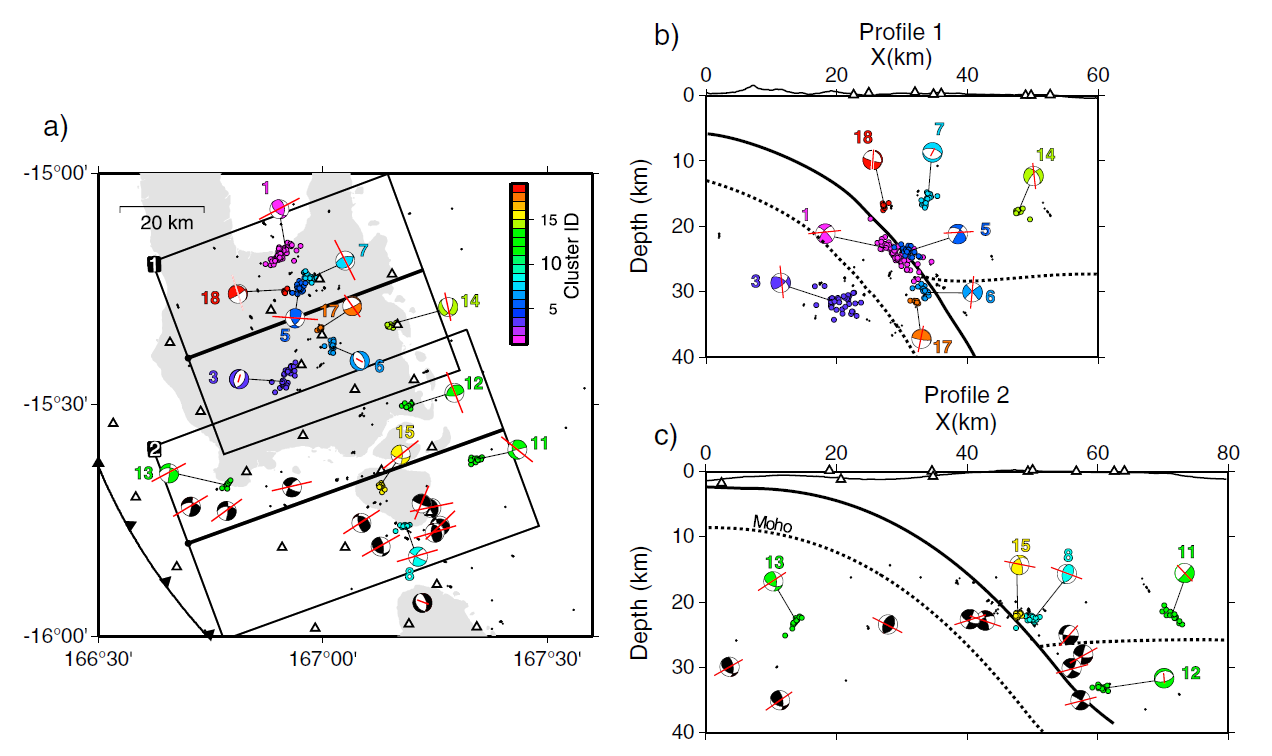 #EarthquakeReport for M7.0 #Earthquake in #Vanuatu

#EarthquakeReport for the M 7.0 #Earthquake offshore of #Vanuatu

no observed tsunami on tide gages

The waves from the M7.0 earthquake near Vanuatu are passing under me on the east coast of the US right now!

Look carefully at the scale on the 2nd image – by the time they reach VA these waves are about 1/2 the width of a human hair so far too small to feel. 1/n pic.twitter.com/q56UWKN6WA

Waves from the M7.0 earthquake in Vanuatu shown on a nearby station using Station Monitor. https://t.co/Tir0KZELXN pic.twitter.com/JUey79Uizv

No #tsunami threat to Australia from magnitude 6.9 #earthquake near Vanuatu Islands. Latest advice at https://t.co/Tynv3ZQpEq. pic.twitter.com/eoxJwLiQbo

The eastern margin of the Australia plate is so sesimically active due to high rates of convergence between the Australia and Pacific plates. You can view earthquakes in this area (and around the world) in 3D using the IRIS Earthquake Browser, like I’ve done here. pic.twitter.com/KBRtwCagcl

Tecto-schematic 3D figure from :
🔹The Influence of Ridge Subduction on the Geochemistry of Vanuatu Arc Magmas (2022)https://t.co/ykBd2L4myK pic.twitter.com/mFNDdrTkvY

The M7.0 earthquake in Vanuatu occurred at a depth of ~28 km in a seismically active area that experiences frequent large earthquakes. Earthquakes in this region are caused by the Australian Plate subducting under the Pacific Plate.https://t.co/OM7bvJKw7W pic.twitter.com/xq9NfDJTiX

Global surface and body wave sections from the M7.0 earthquake in Vanuatuhttps://t.co/60idTVV9BN pic.twitter.com/6gJaLM01LZ

I cannot confirm this is from today’s earthquake: