While I was travelling back from a USGS Powell Center Workshop on the recurrence of earthquakes along the Cascadia subduction zone, there was an earthquake (gempa) offshore of Sumatra.

There was actually a foreshock (more than one): https://earthquake.usgs.gov/earthquakes/eventpage/us7000iq2d/executive
I need to run to catch the sunset and will complete the intro later tonight.

The plate boundary offshore of Sumatra, Indonesia, is a convergent (moving together) plate boundary. Here, the Australia plate subducts northwards beneath the Sunda plate (part of the Eurasia plate) along a megathrust subduction zone fault. This subduction forms a deep sea trench, the Sunda trench.

This was a shallow event near the trench formed by the subduction here. The magnitude was a little small for generating a large tsunami. However, it was shallow, so the deformation reached the sea floor and generated tsunami recorded on several tide gages in the region.

These gages are operated by the Indonesian Geospatial Reference System, though there are some gages that are posted on the European Union World Sea Levels website.

The water surface elevation data was a little noisy on these tide gage plots, but two of them had sufficient signal to justify my interpretation that these are tsunami. My interpretations could be incorrect and I include two plots below.

Many are familiar with the Boxing Day Earthquake and Tsunami from December 2004. This is one of the most deadly events in modern history, almost a quarter million people perished (mostly from the tsunami).

The southern Sumatra subduction zone has an excellent record of prehistoric and historic earthquakes. For example, there is a couplet where earthquake slips overlapped slightly, the 1797 and 1833 earthquakes.

Many think that this area is the next place a large tsunamigenic earthquake may occur. Below we can see the analysis from Chlieh et al. (2008) where they suggest that there is considerable tectonic strain accumulated since these 1797 and 1833 earthquakes. There have been several large earthquakes in this area but they may not have released this strain.

If we look at the Chlieh et al. (2008) study, we will notice that this M 6.9 earthquake happened in an area thought to be in an area that is not accumulating much tectonic strain. I post a figure showing this later in the report.

There are millions of people who live in the coastal lowlands of Padang who may have difficulty evacuating in time should an earthquake like the 2004 Sumatra-Andaman subduction zone earthquake were to occur in this area.

For those that live along the coast here, the ground shaking from the earthquake is their natural notification to evacuate to high ground. For those that live across the ocean, they will get warning notifications to help them learn to evacuate since they won’t have the ground shaking as a warning. This is what happened to many people in December 2004 along the east coast of India and along the coast of Sri Lanka.

Here are some of the larger historic earthquakes in this area, ordered by magnitude: 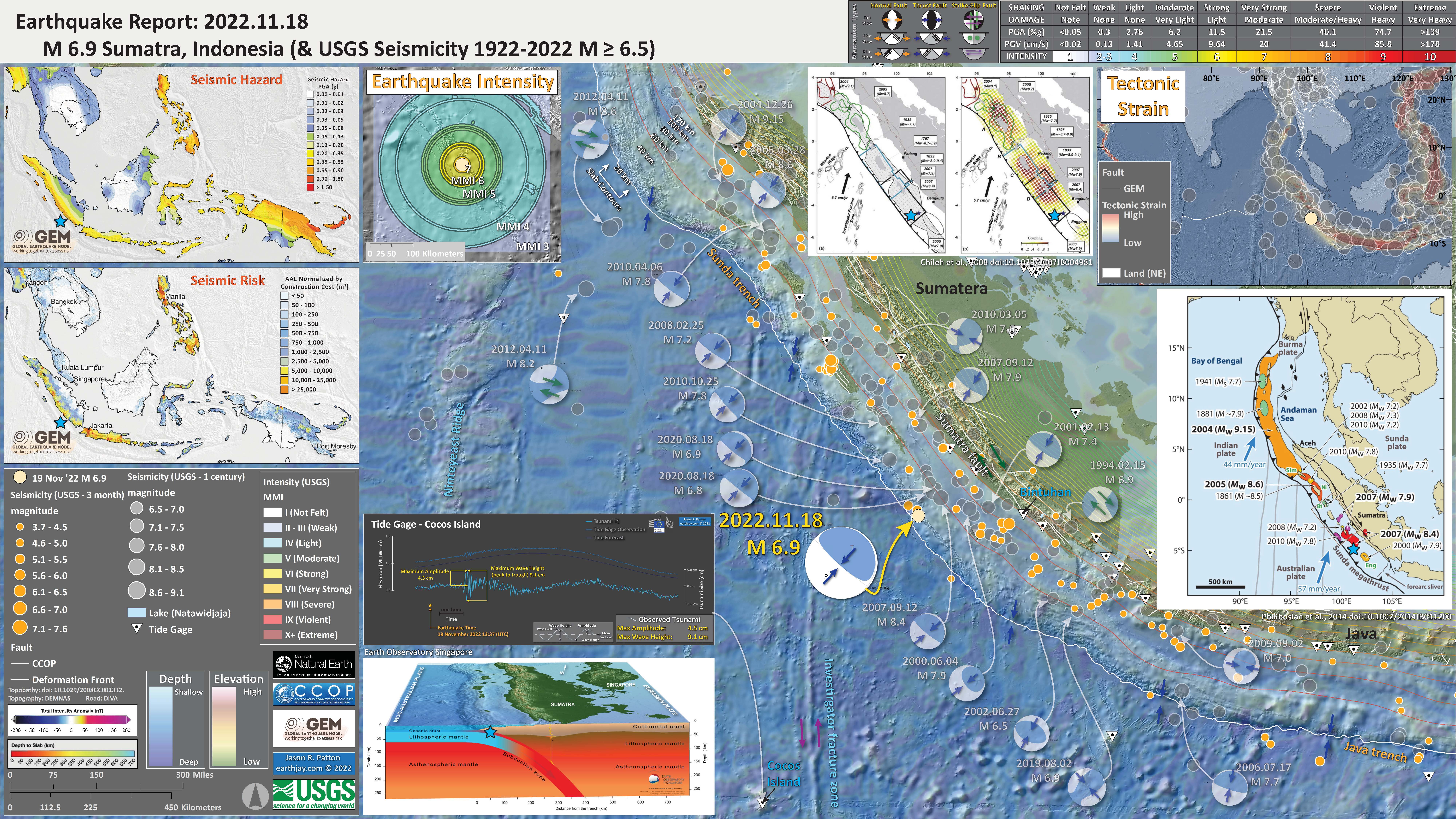 Distribution of coupling on the Sumatra megathrust derived from the formal inversion of the coral and of the GPS data (Tables 2, 3, and 4) prior to the 2004 Sumatra-Andaman earthquake (model I-a in Table 7). (a) Distribution of coupling on the megathrust. Fully coupled areas are red, and fully creeping areas are white. Three strongly coupled patches are revealed beneath Nias island, Siberut island, and Pagai island. The annual moment deficit rate corresponding to that model is 4.0 X 10^20 N m/a. (b) Observed (black vectors) and predicted (red vectors) horizontal velocities appear. Observed and predicted vertical displacements are shown by color-coded large and small circles, respectively. The Xr^2 of this model is 3.9 (Table 7). Distribution of coupling on the Sumatra megathrust derived from the formal inversion of the horizontal velocities and uplift rates derived from the CGPS measurements at the SuGAr stations (processed at SOPAC). To reduce the influence of postseismic deformation caused by the March 2005 Nias-Simeulue rupture, velocities were determined for the period between June 2005 and October 2006. (a) Distribution of coupling on the megathrust. Fully coupled areas are red and fully creeping areas are white. This model reveals strong coupling beneath the Mentawai Islands (Siberut, Sipora, and Pagai islands), offshore Padang city, and suggests that the megathrust south of Bengkulu city is creeping at the plate velocity. (b) Comparison of observed (green) and predicted (red) velocities. The Xr^2 associated to that model is 24.5 (Table 8). Distribution of coupling on the Sumatra megathrust derived from the formal inversion of all the data (model J-a, Table 8). (a) Distribution of coupling on the megathrust. Fully coupled areas are red, and fully creeping areas are white. This model shows strong coupling beneath Nias island and beneath the Mentawai (Siberut, Sipora and Pagai) islands. The rate of accumulation of moment deficit is 4.5 X 10^20 N m/a. (b) Comparison of observed (black arrows for pre-2004 Sumatra-Andaman earthquake and green arrows for post-2005 Nias earthquake) and predicted velocities (in red). Observed and predicted vertical displacements are shown by color-coded large and small circles (for the corals) and large and small diamonds (for the CGPS), respectively. The Xr^2 of this model is 12.8. Comparison of interseismic coupling along the megathrust with the rupture areas of the great 1797, 1833, and 2005 earthquakes. The southernmost rupture area of the 2004 Sumatra-Andaman earthquake lies north of our study area and is shown only for reference. Epicenters of the 2007 Mw 8.4 and Mw 7.9 earthquakes are also shown for reference. (a) Geometry of the locked fault zone corresponding to forward model F-f (Figure 6c). Below the Batu Islands, where coupling occurs in a narrow band, the largest earthquake for the past 260 years has been a Mw 7.7 in 1935 [Natawidjaja et al., 2004; Rivera et al., 2002]. The wide zones of coupling, beneath Nias, Siberut, and Pagai islands, coincide well with the source of great earthquakes (Mw > 8.5) in 2005 from Konca et al. [2007] and in 1797 and 1833 from Natawidjaja et al. [2006]. The narrow locked patch beneath the Batu islands lies above the subducting fossil Investigator Fracture Zone. (b) Distribution of interseismic coupling corresponding to inverse model J-a (Figure 10). The coincidence of the high coupling area (orange-red dots) with the region of high coseismic slip during the 2005 Nias-Simeulue earthquake suggests that strongly coupled patches during interseismic correspond to seismic asperities during megathrust ruptures. The source regions of the 1797 and 1833 ruptures also correlate well with patches that are highly coupled beneath Siberut, Sipora, and Pagai islands. 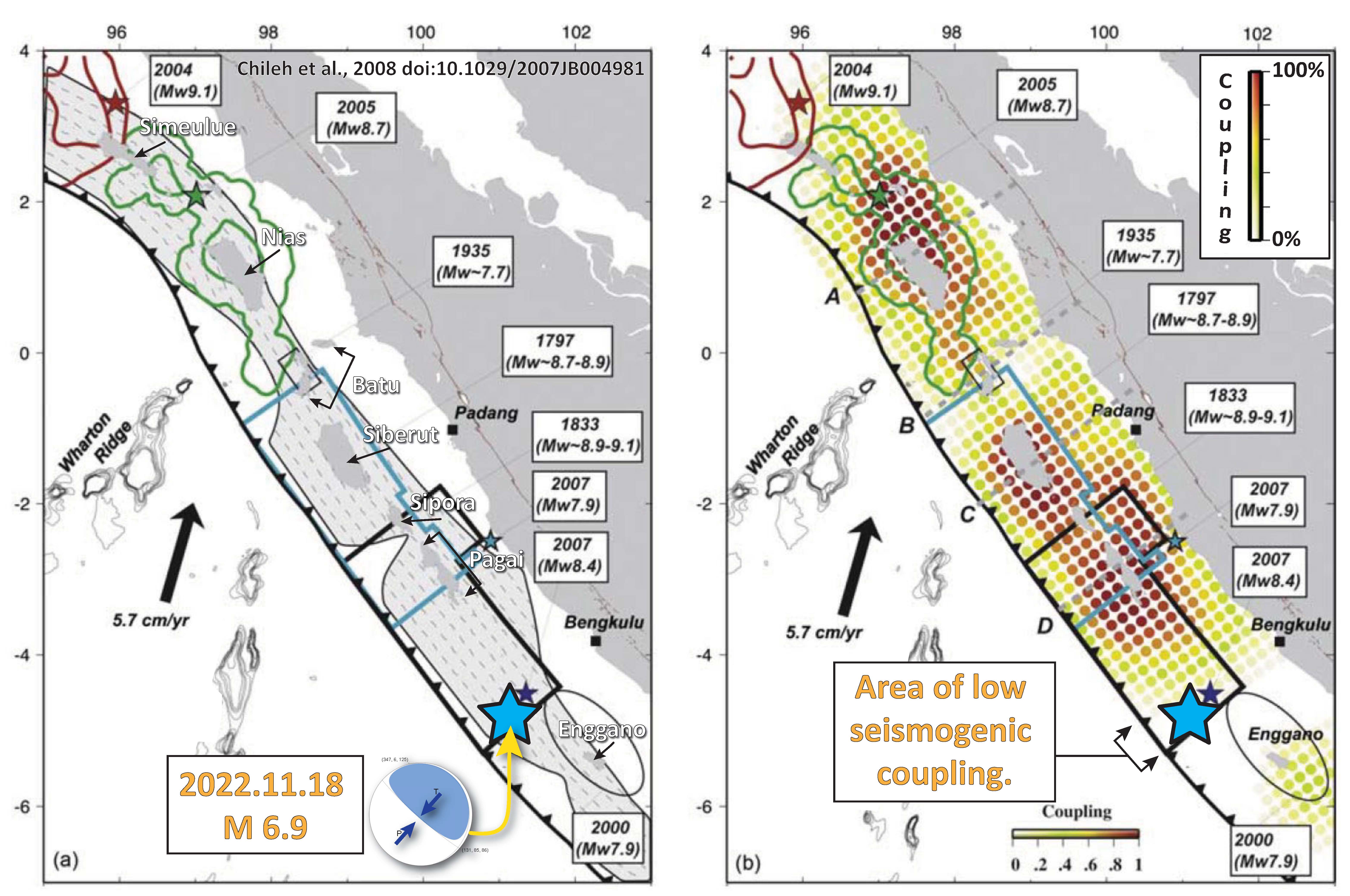 Latitudinal distributions of seismic moment released by great historical earthquakes and of accumulated deficit of moment due to interseismic locking of the plate interface. Values represent integrals over half a degree of latitude. Accumulated interseismic deficits since 1797, 1833, and 1861 are based on (a) model F-f and (b) model J-a. Seismic moments for the 1797 and 1833 Mentawai earthquakes are estimated based on the work by Natawidjaja et al. [2006], the 2005 Nias-Simeulue earthquake is taken from Konca et al. [2007], and the 2004 Sumatra-Andaman earthquake is taken from Chlieh et al. [2007]. Postseismic moments released in the month that follows the 2004 earthquake and in the 11 months that follows the Nias-Simeulue 2005 earthquake are shown in red and green, respectively, based on the work by Chlieh et al. [2007] and Hsu et al. [2006]. The deviation of the Sunda Trench from a regular arc shape (dotted lines) off Sumatra is explained by the presence of the younger, hotter and therefore lighter lithosphere in compartments C–F, which resists subduction and form an indentor (solid line). The very young compartment G was probably part of this indentor before oceanic crust formed at slow spreading rate near the Wharton fossil spreading center approached subduction: The weaker rheology of outcropping or shallow serpentinite may have favored the restoration of the accretionary prism in this area. Further south, the deviation off Java is explained by the resistance of the thicker Roo Rise, an oceanic plateau entering the subduction. Appears to be on the megathrust subduction zone fault

appears to be a megathrust subduction zone fault earthquake

*in area absent of GPS/microatoll data

Cocos Isle gage updated due to twitter peer review from @Harold_Tobin thanks!

Effects of the magnitude 6.9 #earthquake off #Sumatra #Indonesia was felt in my apartment over 776 km away in #Singapore. Managed to record this lamp swaying. #gempa #seismology #sismo #terremoto #geology pic.twitter.com/b1CdcxrCLm

– Learn more about us at https://t.co/ojzht2DDAL

No #tsunami threat to Australia from magnitude 6.8 #earthquake near Southwest of Sumatra, Indonesia. Latest advice at https://t.co/Tynv3Zygqi. pic.twitter.com/ISugUTXpVm

There is no tsunami threat to SL at present & coastal areas of SL are declared safe.#Tsunami #NoThreat #SriLanka #LKA pic.twitter.com/CPQMp12dqD

Earthquakes commonly occur near Sumatra, as the Indo-Australian Plate subducts under the Sunda Plate. The M6.9 earthquake occurred at a depth of 25 km, likely on the subduction interface.https://t.co/OM7bvJsmTO pic.twitter.com/NS3rGVd8hR

Surface waves from a M6.9 earthquake near Bengkulu, Indonesia at 18/11/2022 13:37:09UTC, received in the UK approximately an hour after the earthquake on @BGS and @raspishake devices. The frequency of these waves is shown on a plot from the BGS Elmsett seismometer. @rdlarter pic.twitter.com/OQkXOm5K1o

Waves from the M6.9 earthquake southwest of Sumatra shown on a nearby station using Station Monitor. https://t.co/Tir0KZmCJF pic.twitter.com/H5AjBzaKRH

Watch the waves from the M6.9 earthquake in Sumatra, Indonesia roll across seismic stations in North America. (THREAD 🧵) pic.twitter.com/JMolvkAy4b

Back projection for the M6.9 earthquake southwest of Sumatra, Indonesiahttps://t.co/SLKRaU3oUA pic.twitter.com/glLYRXLj7X

Earthquakes commonly occur near Sumatra, as the Indo-Australian Plate subducts under the Sunda Plate. The M6.9 earthquake occurred at a depth of 25 km, likely on the subduction interface.https://t.co/OM7bvJsmTO pic.twitter.com/NS3rGVd8hR

– Learn more about us at https://t.co/ojzht2DDAL