Taiwan is an interesting place, from a tectonic perspective. There is an intersection of several plate boundary fault systems here. Along the western boundary of Taiwan the Eurasia plate subducts (dives beneath) the Philippine Sea plate forming the Manila trench. This megathrust subduction zone fault system terminates somewhere in central-northern Taiwan.

Intersecting central Taiwan from the east is another subduction zone where the Philippine Sea plate subducts beneath the Eurasia plate, forming the Ryukyu trench.

There was an earthquake in Taiwan in 1999 that has been commemorated by creating a park and museum that preserves some of the evidence of the earthquake. This Chi-Chi earthquake cause lots of damage and, sadly, lots of suffering. In addition, because of the dominance of the computer chip manufacturing industry in Taiwan at the time, the price of computer chips was greatly inflated. The global economy suffered following this earthquake.

This 18 September 2022 M 6.9 earthquake occurred on a crustal fault that strikes (trends) parallel to the coast. Because of the mapped faults, I interpret this to have been a left-lateral strike slip earthquake.

There was a foreshock, a mag M 6.5 earthquake, nearby, the day before. 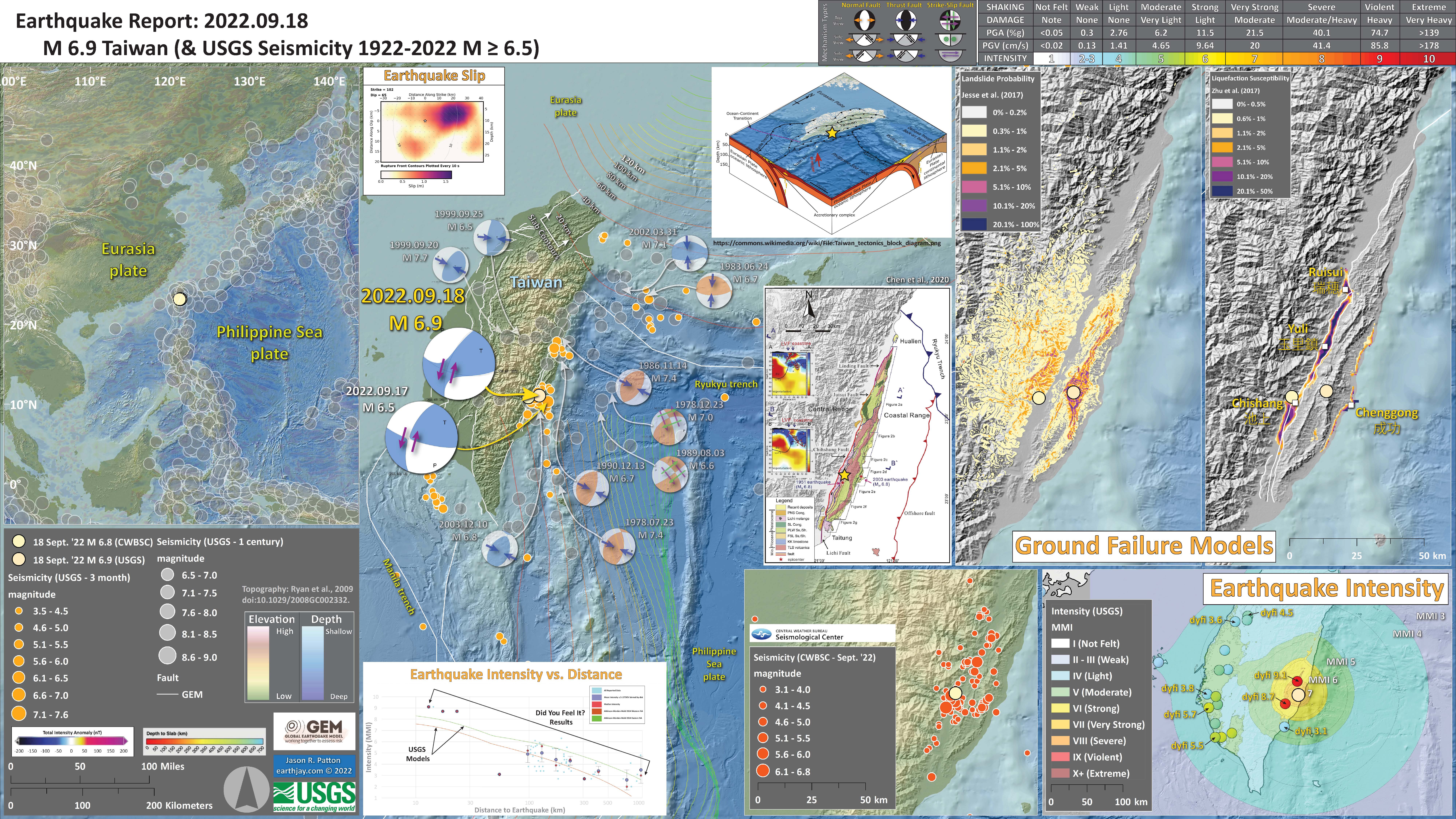 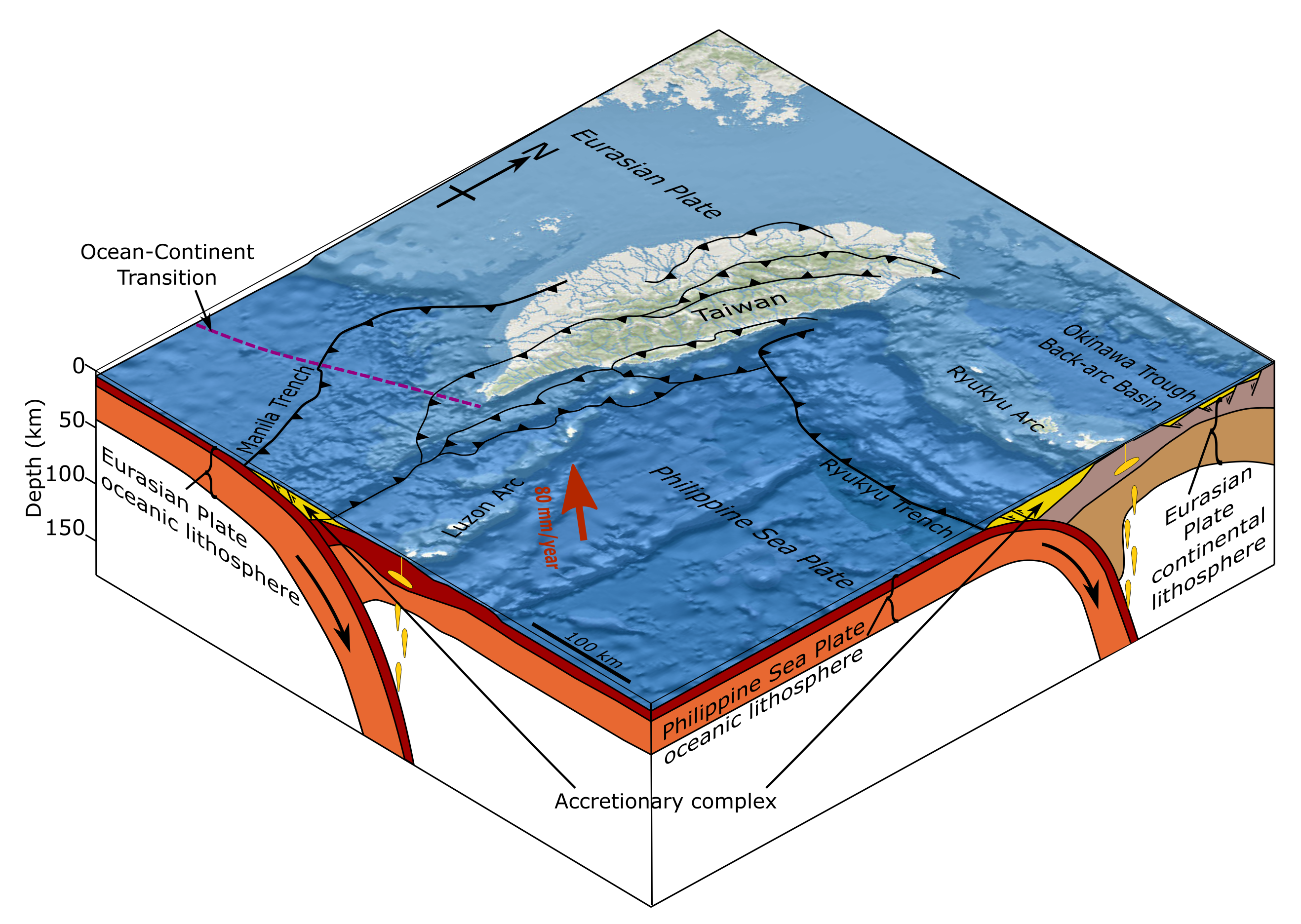 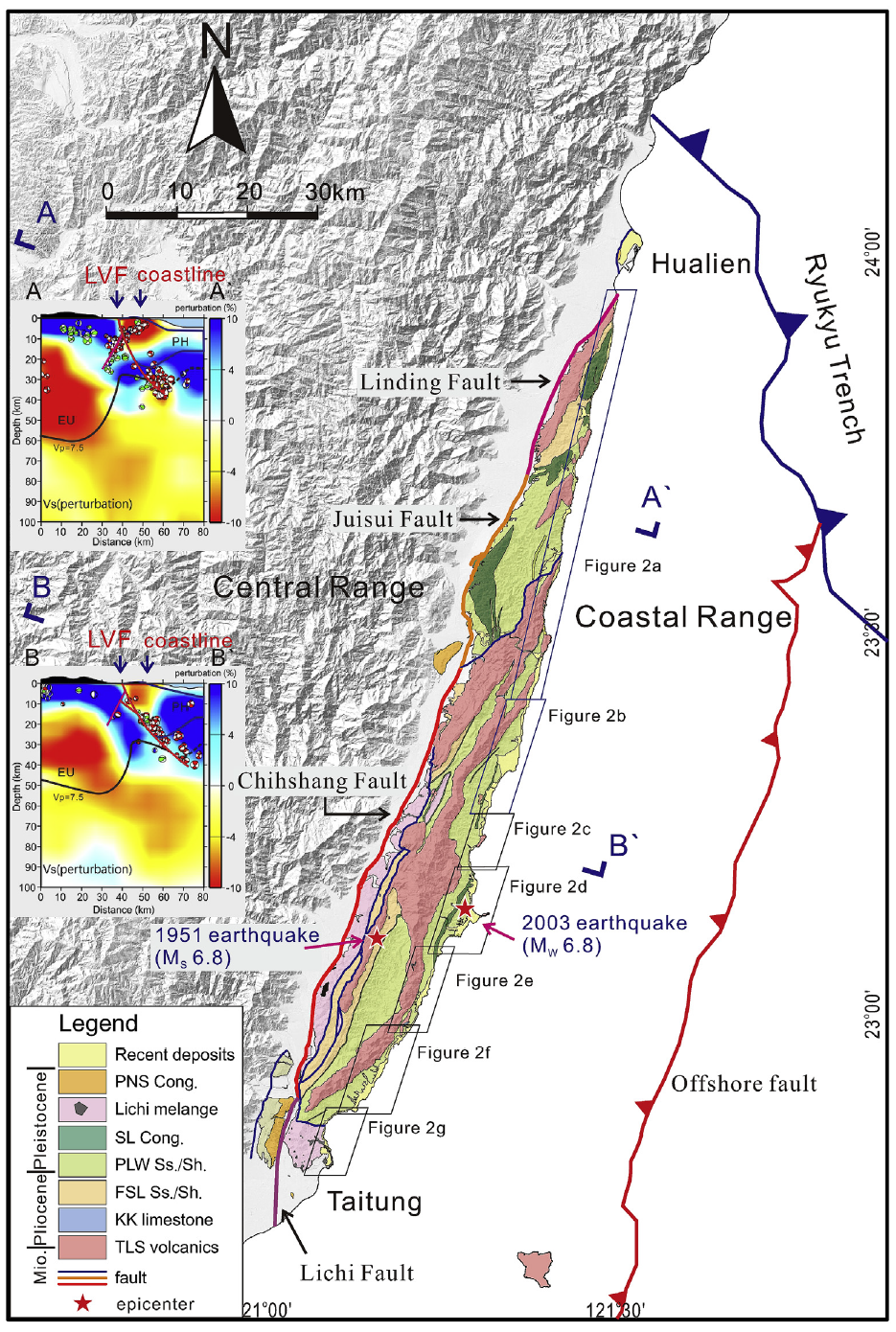 Geologic map of the Coastal Range on shaded relief (after Wang and Chen, 1993). The Longitudinal Valley Fault (LVF) can be subdivided into the Linding and Juisui locked Fault and the Chihshang and Lichi creeping Fault. Vertical cross-sections of VS perturbation tomography along the AeA0 and BeB0 profiles denote the Central Range, the Coastal Range, and the LVF. EU: Eurasian Plate; PH: Philippine Sea Plate. A neotectonic snapshot of Taiwan and adjacent regions. (a) Taiwan is currently experiencing a double suturing. In the south the Luzon volcanic arc is colliding with the Hengchun forearc ridge, which is, in turn, colliding with the Eurasian continental margin. In the north both sutures are unstitching. Their disengagement is forming both the Okinawa Trough and the forearc basins of the Ryukyu arc. Thus, in the course of passing through the island, the roles of the volcanic arc and forearc ridge flip along with the flipping of the polarity of subduction. The three gray strips represent the three lithospheric pieces of Taiwan’s tandem suturing and disarticulation: the Eurasian continental margin, the continental sliver, and the Luzon arc. Black arrows indicate the suturing and disarticulation. This concept is discussed in detail by Shyu et al. [2005]. Current velocity vector of the Philippine Sea plate relative to the Eurasian plate is adapted from Yu et al. [1997, 1999]. Current velocity vector of the Ryukyu arc is adapted from Lallemand and Liu [1998]. Black dashed lines are the northern and western limits of the Wadati-Benioff zone of the two subducting systems, taken from the seismicity database of the Central Weather Bureau, Taiwan. DF, deformation front; LCS, Lishan-Chaochou suture; LVS, Longitudinal Valley suture; WF, Western Foothills; CeR, Central Range; CoR, Coastal Range; HP, Hengchun Peninsula. (b) Major tectonic elements around Taiwan. Active structures identified in this study are shown in red. Major inactive faults that form the boundaries of tectonic elements are shown in black: 1, Chiuchih fault; 2, Lishan fault; 3, Laonung fault; 4, Chukou fault. Selected GPS vectors relative to the stable Eurasian continental shelf are adapted from Yu et al. [1997]. A,Western Foothills; B, Hsueshan Range; C, Central Range and Hengchun Peninsula; D, Coastal Range; E, westernmost Ryukyu arc; F, Yaeyama forearc ridge; G, northernmost Luzon arc; H, western Taiwan coastal plains; I, Lanyang Plain; J, Pingtung Plain; K, Longitudinal Valley; L, submarine Hengchun Ridge; M, Ryukyu forearc basins. Map of major active faults and folds of Taiwan (in red) showing that the two sutures are producing separate western and eastern neotectonic belts. Each collision belt matures and then decays progressively from south to north. This occurs in discrete steps, manifested as seven distinct neotectonic domains along the western belt and four along the eastern. A distinctive assemblage of active structures defines each domain. For example, two principal structures dominate the Taichung Domain. Rupture in 1999 of one of these, the Chelungpu fault, caused the disastrous Chi-Chi earthquake. The Lishan fault (dashed black line) is the suture between forearc ridge and continental margin. Thick light green and pink lines are boundaries of domains. Proposed major sources for future large earthquakes in and around Taiwan. Thick red lines are proposed future ruptures, and the white patches are rupture planes projected to the surface. Here we have selected only a few representative scenarios from Table 1. Earthquake magnitude of each scenario is predicted value from our calculation.

#EarthquakeReport for M 6.9 #Earthquake in Taiwan on 18 September 2022

there was lots of damage and some casualties :-(

landslides and liquefaction models show that there was a high likelihood for these.https://t.co/3tzXgvQl26